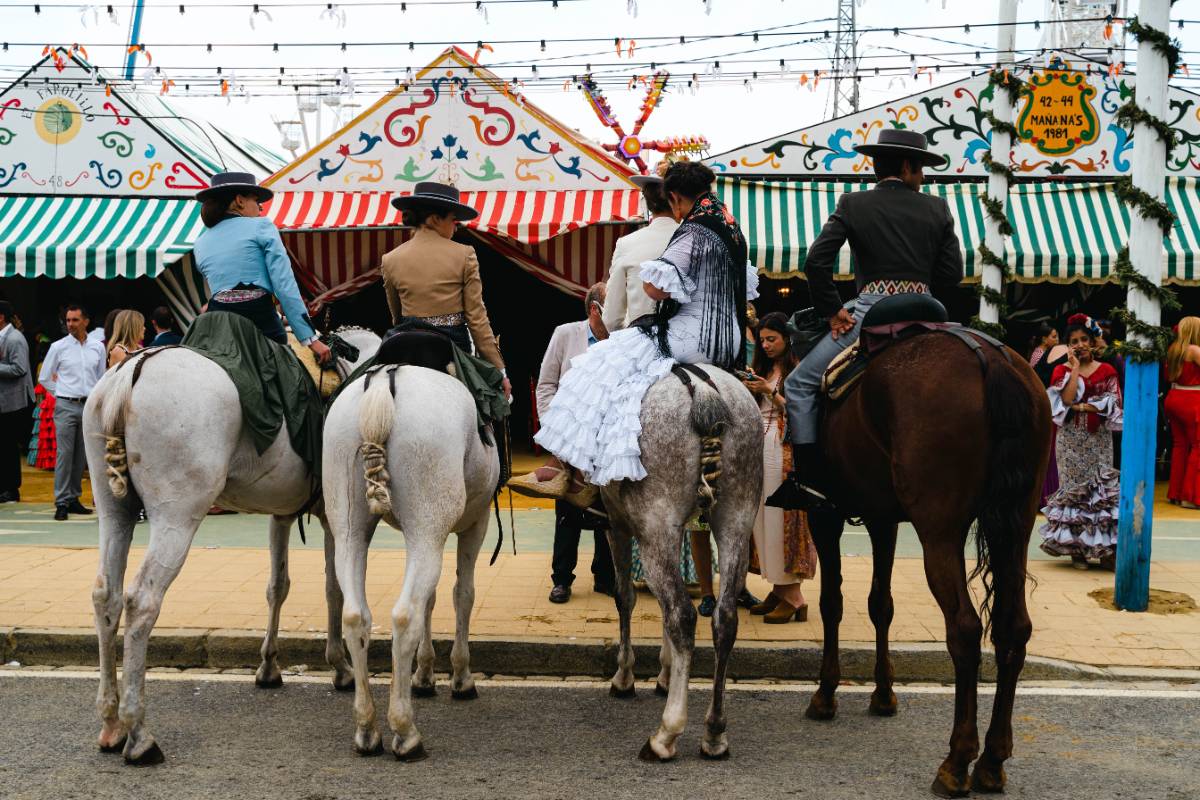 Sevilla’s Feria de Abril is the most anticipated event of the year in southern Spain.

Marked by the iconic lighting up of the ‘portada’, this year the Feria officially began at midnight on the 30th of April. A week later, the 7th of May marks the end of the event with a spectacular fireworks display.

La Feria de Abril is an event where people from all over the country gather to share and make memories, revelling in a combination of traditional drinks, food, and dance.

Dating back to 1846, la Feria originated from councillors José María Ibarra and Narciso Bonaplata, who devised a three day fair with the main purpose of trading livestock. Approved by Queen Isabel II, the first Feria took place in 1847. Through the years, la Feria soon became a more social festivity, leaving behind its commercial nature.

Its audience grew more and more, eventually leading to the event moving to its current location in 1973 in order to sustain a greater quantity of visitors.

Overview of the Event

The front of la Feria is adorned with the ‘portada’, a decorative structure marking the entrance of the event.

Every year, the portada’s design pays homage to one of Seville’s monuments. This year’s entryway embodied the design conceived for the Feria’s 2020 edition which never took place, celebrating the Hotel Alfonso XIII. The design alludes to the city’s regionalist architecture, as well as commemorates the 500th anniversary of the first trip around the world. Learn more about this year’s portada in this article.

Inside la Feria, one can find 15 streets, all which are named after important Sevillian bullfighters. There are a total of 1,053 ‘casetas’ in la Feria, where families and groups gather to celebrate. Most of the ‘casetas’ are private, meaning they are rented out by a specific group or family and have a guestlist. However, there are also public casetas hosted by political parties and the municipality, including one specifically for tourists.

The Feria de Abril is characterised by bright colours, lively music and dance, and traditional food and drink. You can expect to see women dressed in extravagant flamenco dresses and men in their most elegant suits.

People will be dancing sevillanas, a traditional dance characterised by twisting hand movements, zapateado (foot stomping), and palmas (clapping). Typical Feria food includes tortilla de patatas, fried fish, and chocolate churros for dessert. The most popular drink at the event is the ‘Rebujito’, made with Manzanilla sherry wine, lemon/lime soft drink, and mint.

After two years of not being able to carry out the Feria de Abril celebrations due to Covid-19, the people of Seville were more eager than ever to partake in the event this year. According to this article, last Sunday marked an all-time record of attendance at the event.

Tips for your visit:

If you haven’t attended the event yet, we highly recommend you go get a taste of traditional Sevillian culture. Here are a few tips on how to make the most of your feria experience:

If you like this post, make sure you look at this other article about parks to picnic in Seville. Stay tuned for our upcoming updates on the Feria de Abril!